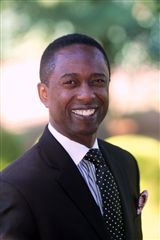 Nasser Samedy joined the Admissions Office in the spring of 2014 as Director of Middle School Admissions. Nasser brings to the Admissions staff a deep understanding of human nature and a love of children and education. The son of Haitian immigrants, Nasser grew up in Queens, NY in a musical family.
After attending Queens College, Nasser decided to pursue his music dream. He lived in Osaka, Japan for two years and used that as the springboard for 20 years of work in the music industry. His experiences included multiple world tours, live appearances at the Grammy Awards, World Music Awards and American Music Awards. During this time, he also participated in multiple Amnesty International concerts, the focus of which was raising funds to help children across the world.

Nasser’s formal music career was put on hold when he married Marthe Salomon-Samedy, a Pre-School Teacher in New Jersey. In order to be home and available to his family, he worked in management at Staples for 15 years doing interviewing, mentoring and training for new hires, facilitating orientation classes for new managers and working with Human Resources to develop new strategies for training employees. Nasser and Marthe are the proud parents of Malachi Samedy ’22. Malachi came to D-E in 2013. He was recently named by Huffington Post as one of 12 top musical prodigies under the age of 12 in the country. He plays drums and piano, has performed nationally and been invited to the White House to play for the President. Nasser’s passion for music and for giving back has been passed to Malachi who now regularly performs at benefits for children worldwide.

Nasser is happy to be a part of the D-E Admissions Office. He believes deeply in the power of education, loves children and believes that helping to open the door to a D-E education is an honor and a privilege. His positive personality leaves everyone that he meets feeling better than when he met them. Nasser can be reached at samedn@d-e.org.
Back