Dwight-Englewood School (D-E) is a coeducational, independent school of approximately 900 students, serving a seamless education experience for students in preschool through Grade 12. Comprised of three divisions -- the Lower, Middle, and Upper Schools -- each with their own distinctive personality, D-E is the most ethnically-diverse school in Bergen County with students who represent over 80 communities in New Jersey and New York. The school is accredited by the Middle States Association of Colleges and Schools and the New Jersey Association of Independent Schools, and is a member of the National Association of Independent Schools.

Dwight-Englewood gives the highest quality preparation for college and university work while fostering independent thinking; the ability to solve problems; and the skills, tolerance, and integrity it takes to thrive in our multifaceted world. To learn more, including our core values, and our Profile of a D-E Teacher and Profile of a D-E Graduate statements, visit www.d-e.org/values. To learn about our school history, please visit www.d-e125.org.

“As a community of learners, Dwight-Englewood School strives to foster in each student a passion for life-long learning. We seek excellence, honor integrity, and embrace diversity in order to develop the skills, values, and courage to meet the challenges of a changing world and make it better.”

An overview of special virtual, school-day Assembly Zoom programs being held this Fall 2020 with and for our D-E students and faculty/staff.

Questions regarding the Election Reflection series may be directed to Dr. Buggs at: buggsm@d-e.org

Dwight-Englewood is a non-profit corporation accredited by the Middle States Association of Colleges and Secondary Schools and the New Jersey Association of Independent Schools. Dwight-Englewood School is an equal opportunity employer and does not discriminate on the basis of sex, ethnicity, age, national origin, religion, genetic information, marital status, sexual orientation, gender identity, pregnancy or military veteran status. The diversity of our student body supports our commitment to employ a diverse faculty and staff. Educators and staff from all backgrounds who bring knowledge and expertise in equity, diversity and multicultural education are especially encouraged to apply. 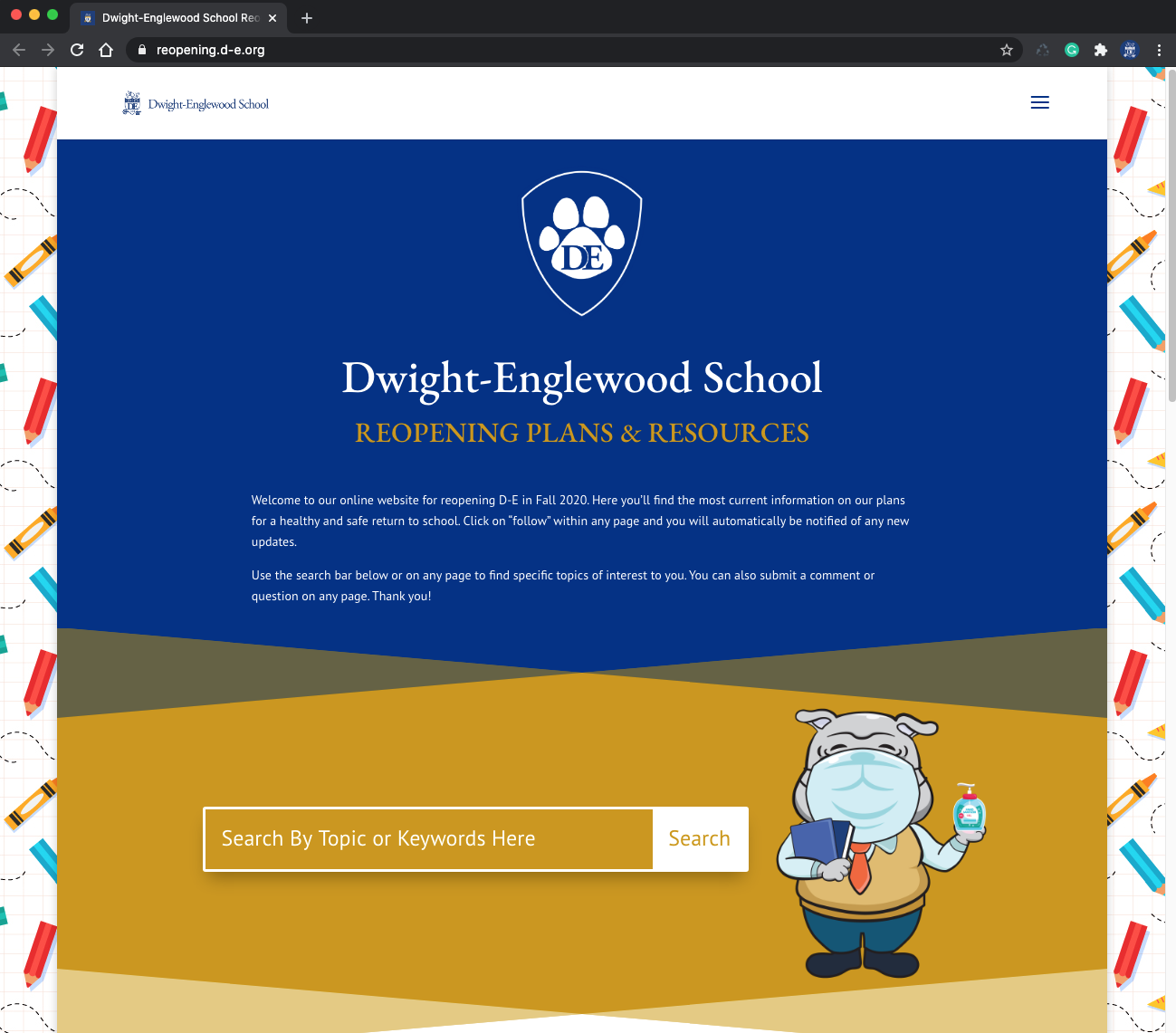 All D-E families and faculty/staff are invited to click here to visit the online website for reopening D-E in Fall 2020 and for managing through COVID. Find the most current information on the School's plans for a healthy and safe 2020-2021 school year. Go to reopening.d-e.org. 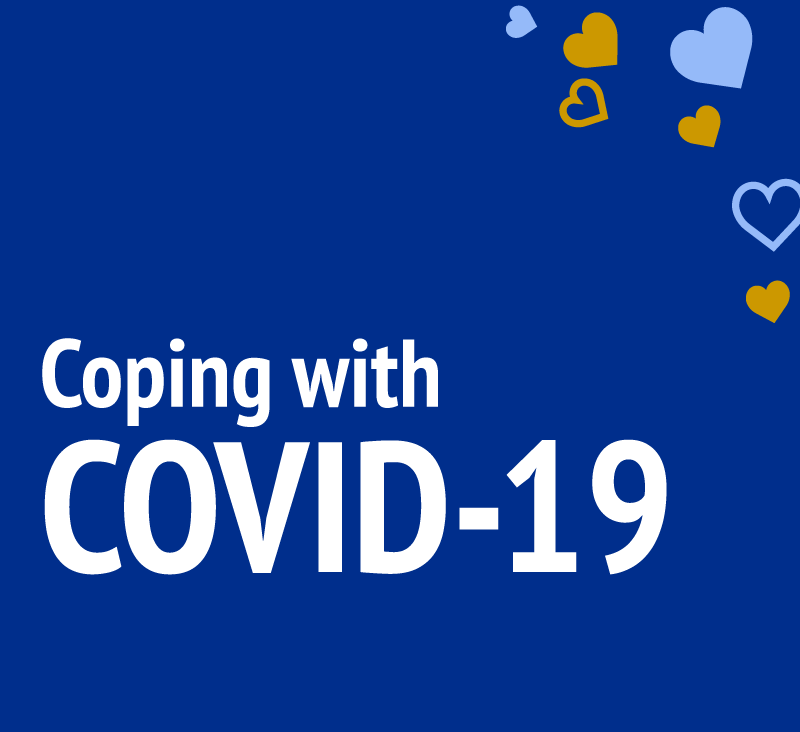 Click here for resources to support your family, friends, coworkers, acquaintances, and strangers if needed during this difficult time of COVID-19. (D-E login required.)

An Open Letter from Dwight-Englewood School 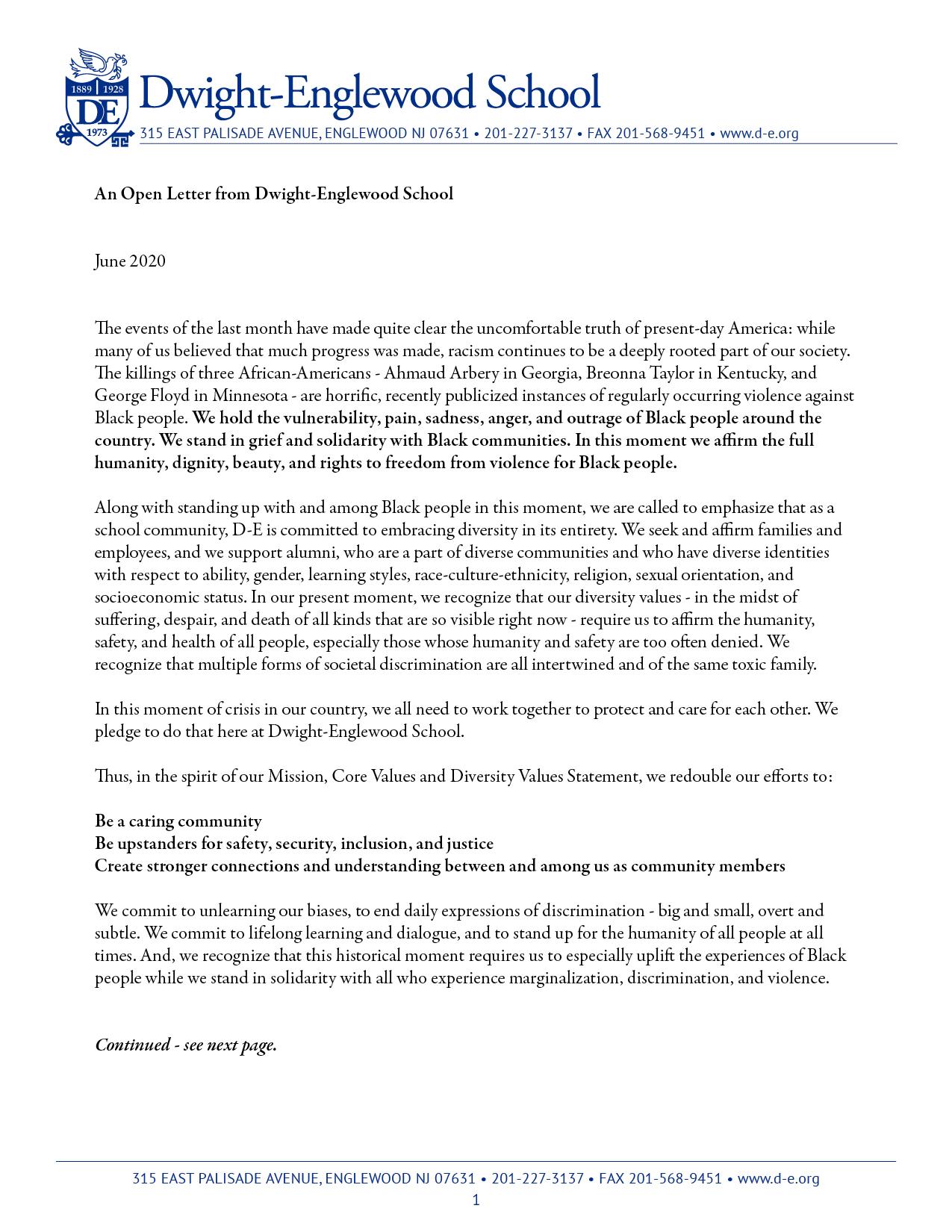 In this moment of crisis in our country, we all need to work together to protect and care for each other. We pledge to do that here at Dwight-Englewood School. This letter affirms our commitment as a School to lifelong learning and dialogue, and to stand up for the humanity of all people at all times.
Click here to read the full letter and to see the members who have signed this letter.


If you are also in alignment with the spirit of this Letter and wish to add your signature please click here.

We will regularly update this PDF as new signatures are received. Questions? Email buggsm@d-e.org.