In Spring 2022, the Dwight-Englewood School (D-E) Board of Trustees announced that Jeremy Gregersen had accepted the position as the next Head of School for D-E. Mr. Gregersen will begin his role as the sixth Head of School for D-E on January 1, 2023. Ms. Patricia Gedney ("Pat") Boig, currently serving as Interim Head of School, will continue to serve in this role through December 31, 2022.

On behalf of the Board of Trustees, I write today to follow up on my communication from May about plans for school leadership for the 2022-2023 school year.
We are excited to announce that Jeremy Gregersen has moved forward his start date as Dwight-Englewood’s new Head of School from July 1, 2023 to January 1, 2023.
Additionally, we are happy to report that Pat Boig has accepted the role of Interim Head of School through December 31, 2022. Since stepping in as Acting Head of School and now Interim Head of School, Pat has led D-E with a steady hand, resolve and, of course, a sense of humor and we are appreciative of her tireless work ethic, leadership and commitment to our school.
Jeremy has been working closely with Pat, the Board of Trustees, members of the senior administration and the facilities team to ensure a smooth transition to his role as Head of School.
We are fortunate to have strong leaders like Jeremy and Pat both stepping up for our school next year. Their leadership and the thoughtful transition they are working through together will provide a great level of stability for D-E as we begin the next chapter of our journey as a top Independent School in the Tri-State area.
The Board will continue to keep you apprised of transition plans, including events to celebrate Jeremy’s start as our next Head of School. I hope you all enjoy the rest of your summer.
Respectfully,
Robert E. Miller
President, Board of Trustees 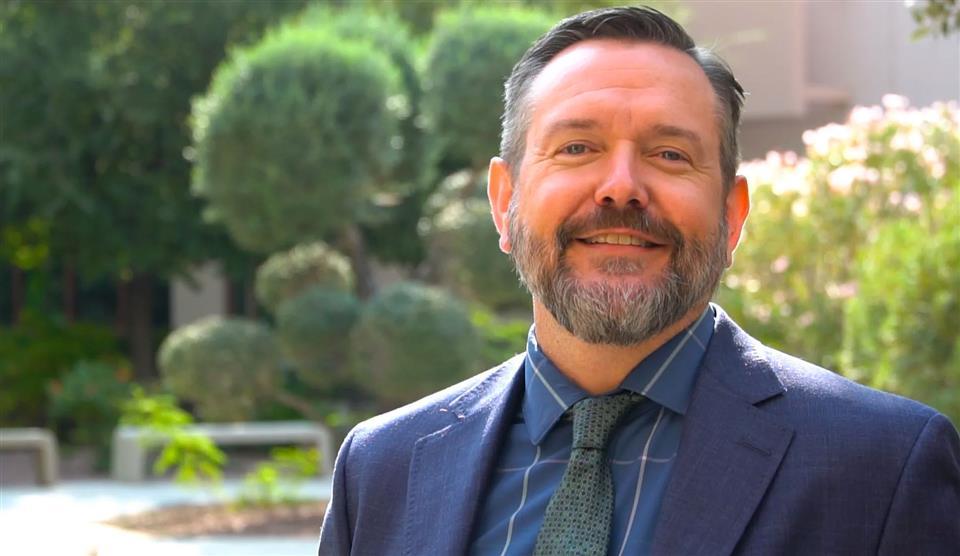 An Interview with Jeremy Gregersen

Note: The below is excerpted from an article in the June 2022 print edition of Spectrum, the D-E Upper School newspaper. This article was written by Spectrum Student Editors Sunaya Mueller '22 and Giulia Silverstein '22

“I think that the proximity to New York City is really exciting to me,” says Gregersen. “I am really looking forward to four seasons, that there is not just heat and not heat, which is what you have in Las Vegas. But for me, the place I am looking forward to the most is Dwight-Englewood. You don’t take on a job like this without the school being the center of it.”

Since his appointment, Gregersen says that The Meadows School has grown in size, has built up its arts programs, and has seen increased success in its athletic programs. But Gregersen is most proud of leading the shift towards a more holistic education. “I have asked the school to think more about students than student resumes,” he says. “I think that education should inspire joy in people. Even the highest level education, even the most rigorous educational experience, should inspire joy.”

Compared to [The Meadows School], Gregersen describes Dwight-Englewood as “the future. It is like stepping into a time machine at my current school for ten years, in terms of building out programs to support students with regard to counselors and psychologists, but also just the overarching philosophy that you can both have a really demanding high-level academic experience, as well as a focus on the health and wellness of students.”

Yet, Gregersen values the importance of academic rigor: “Challenging students is transformative. You can really transform lives with highly rigorous academic experiences.”

According to Gregersen, the Head of School search process was challenging. After the Dwight-Englewood Board of Trustees narrowed down its competitive search to its semi-finalist pool, Gregersen “flew out to D-E for 90 minutes of interviewing, where I was grilled by the Search Committee. But when I was done, I called my wife, and I said to her, ‘If I don’t get this job, that’s cool, because I just had the greatest time.’ It was actually really fun to sit and talk about school with these people who cared so deeply about Dwight-Englewood.”

Mr. Gregersen has taught in the classroom since his appointment as Head of School in 2014, and hopes to continue this tradition at D-E. “I think it is important to be a teacher, that you spend time in the classroom, that you know what it is like to be a student or teacher at a school,” says Gregersen. “I just love it. I love being in classes, I love being around students. I always used to joke that I get paid to talk about books with smart people. Who gets that?”

While speaking to Spectrum, Mr. Gregersen raves about his favorite novel, Moby Dick: “I feel like every time I read it, I get something new out of it.” Gregersen’s favorite hobby? Running! “I am a big runner, both road runs and trail runs. I haven’t run a race in a while, but I have run a handful of 50ks.” His worst job experience? “It was at the University of Utah, and I had taken a job filling vending machines all over campus. I was supposed to get up at four o’clock in the morning and fill vending machines. I woke up in the morning, and it was snowing, so I just went back to bed. I was fired immediately!”

When he steps into his role at Dwight-Englewood in 2023, Gregersen is focused on finding a balance between students’ academic and emotional experiences. “More than anything else, Dwight-Englewood offers this opportunity to illustrate not only that you can focus on the student experience and do high level academic work, but that focusing on the student experience actually allows for superior approaches to academic work,” says Gregersen. “You don’t have to choose one or the other. In a country where prep school academics are focused on rigor and on getting into the right university, you will actually be in better condition if you are focusing on what students actually need out of their educational experience.”

Gregersen strives to “be present” and foster a tight-knit community at Dwight-Englewood. “More than anything else, I am lucky to be landing in a place that is so community-oriented. One of the reasons that we have stayed in Las Vegas is that the school has become our home. It has become an extended family to us, and we look forward to doing the same thing in New Jersey.”